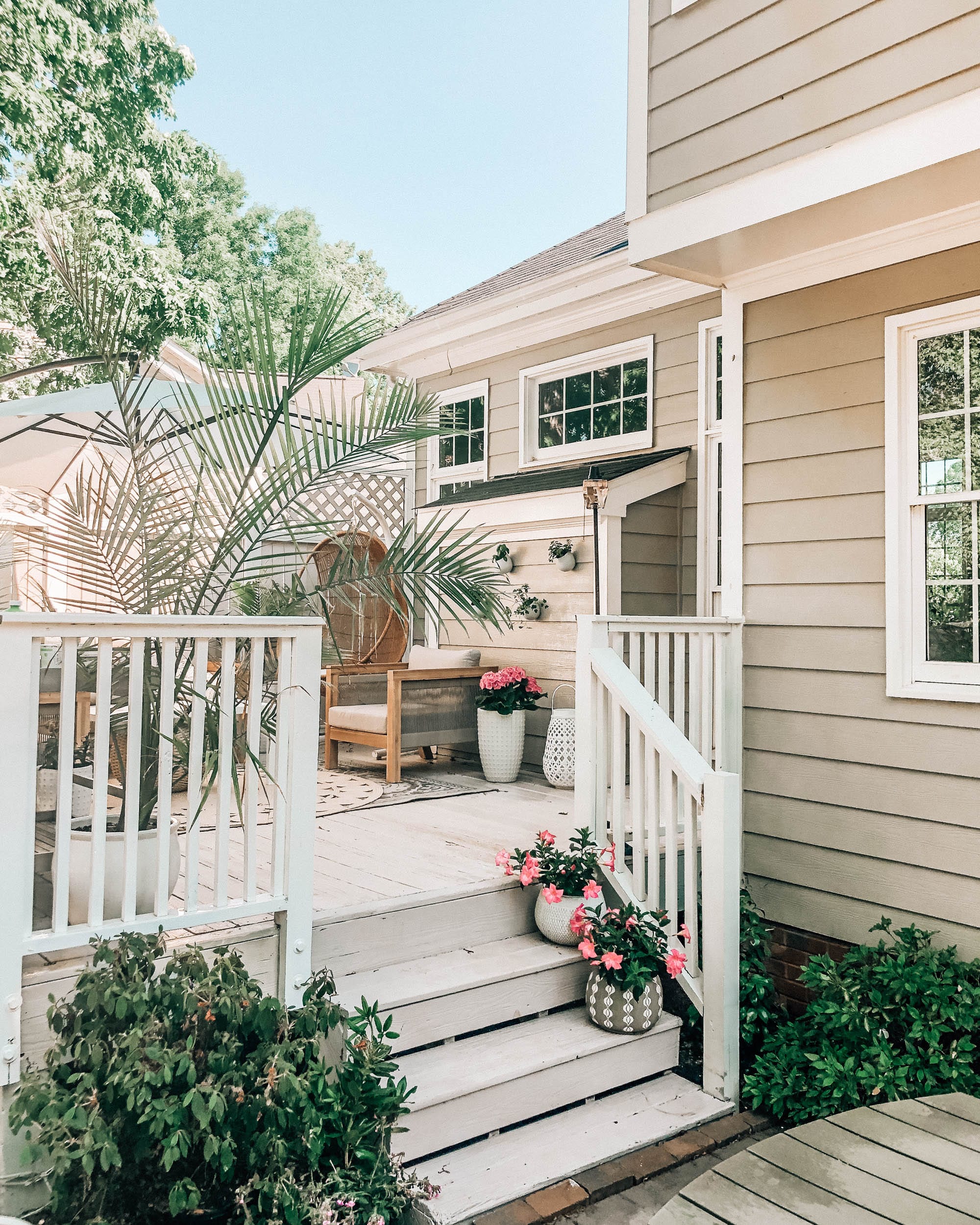 I really have no idea where April went but I thought I’d write a post today just updating you and chatting about life. How was your April? Was it positive? Challenging? Enjoyable? There are few things I love more than catching up with someone over coffee  and this post is going to be a digital version of that, sorta.  April was a whirlwind month and it flew by mainly due to how busy it was. Last month was filled with weekends out of town (Dallas and Charleston) or hosting family in town (TJ’s parents visited from FL) and many, many weeks of TJ not being home. I don’t think there was one week where he wasn’t traveling for work. I really wish we could just book a last minute trip somewhere and take a much-needed mental break for like, two weeks… I’ve really been craving that quality time! One of these days that’s going to happen.

For me, April was challenging. Actually, the last few months have been. Since TJ starting his new position in January, which requires him to travel 75% of the time, I feel like I am still struggling with being alone a lot. I knew it would be an adjustment, but I didn’t fully know how I’d handle it. It’s definitely made me realize what I do want in life and what I don’t and it’s motivated me to work harder to reach certain goals. Him being away really doesn’t affect me much during the daytime but it has significantly during the evenings. I hate to even talk about it because it’s so personal but it’s been a huge change for me, and has affected how much I share on here, and I’m not really adapting as well as I hoped… I mean, I’ve seen him almost every day for 10 years so it’s been kind of weird and has left me in not the best moods at night time. I know there are couples in way, way worse situations though so I’m trying to remain as positive as possible and also keep our house in check.  Anyways, if you are reading this and you have a spouse who travels frequently for work, I’m with you! It’s hard. My parents traveled so much internationally while I was growing up and I really don’t understand how they did it. It gives me Sunday scaries again, which I haven’t had in years.

On a more positive note, those circumstances have pushed me to spend more time cultivating community and saying “yes” more often to things that I used to not make time for. For example, a neighbor friend of mine texted me the other day asking me to go to a local spring festival and, since then, we’ve made plans to meet up for walks and get outside more while her husband travels a too. It’s like she came back into my life at the perfect time! I went to a blogger fitness meet-up the other weekend and I can’t tell you the last time I said yes to something like that… it’s been years, but I was able to catch up with an old friend and meet new ones. April also started with a conference in Texas which was such a fun way to connect with others who do what I do. I’ve had tendencies to put my personal life and work in front of relationships lately and I plan to be better about that moving forward. As someone who spends the weekdays alone, I’ve really found that it is just as important to incorporate spending time with others and building relationships as it is to spend time working hard alone. I don’t know where I fall on the introvert scale, but I know it’s probably somewhere a little closer to an introvert although I definitely have times where I crave friend time!

I think when you let the negative blind you from seeing the positive, it can affect many aspects of your life and keep you from enjoying things you once enjoyed… for me, writing blog posts has been one of those. I don’t know what it is, but I haven’t written much on here lately. I also think my interests have slightly changed over the past year which has had me thinking a lot about the future and where I want the direction of this to go.

Anyways, I hope your last month was a joyful one! I’m excited for May. A new oyster/seafood restaurant opened up right near our house and I’m positive I will eat there at least 10 times this month. I also don’t have any plans to travel as of now and TJ’s schedule is not as crazy as last month’s so May looks promising for more quality time with him.

I thought I’d also share a few of my favorite things in April whether it be a dress I wore over and over, a helpful beauty product I discovered, or just anything that made the month a little more happy!

Old Navy Opening
Anytime anything new opens near our house I get really excited and our area is in major growing stages with new businesses popping up every month. This month, an Old Navy opened up and I am SO excited about it. I mean, there was already one like 20 minutes away, but now it is 5-6 minutes so I’m happy to have more clothing options close by for when I need something last minute or if I’m just in the mood to do some shopping.

A Flowy Spring Dress
I wore this dress multiple times in April and I think it is a beautiful option for any special occasions you may have coming up. It can also be dressed up or down though which is my favorite type of dress! I wore it to the conference I went to and then wore it again in Charleston for dinner one night. Both times, I wore it with these shoes. 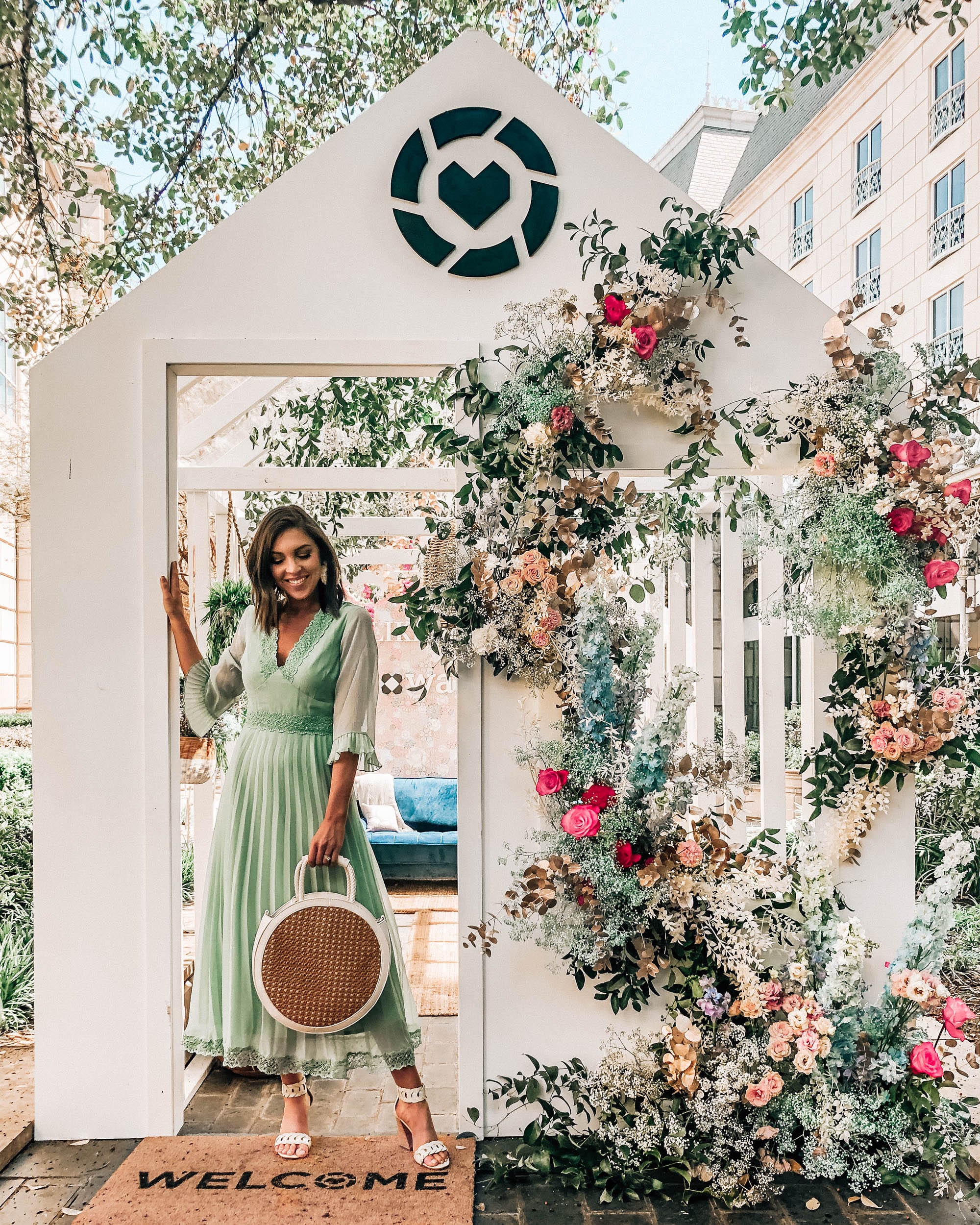 Another Comfy Midi Dress
I’ve been loving midi dresses this season and, while this ribbed dress is a little thicker (great for when it’s in the 60’s), I just can’t stop wearing it! If you’re pregnant, this dress would be such a cute maternity option and it’s a great price. 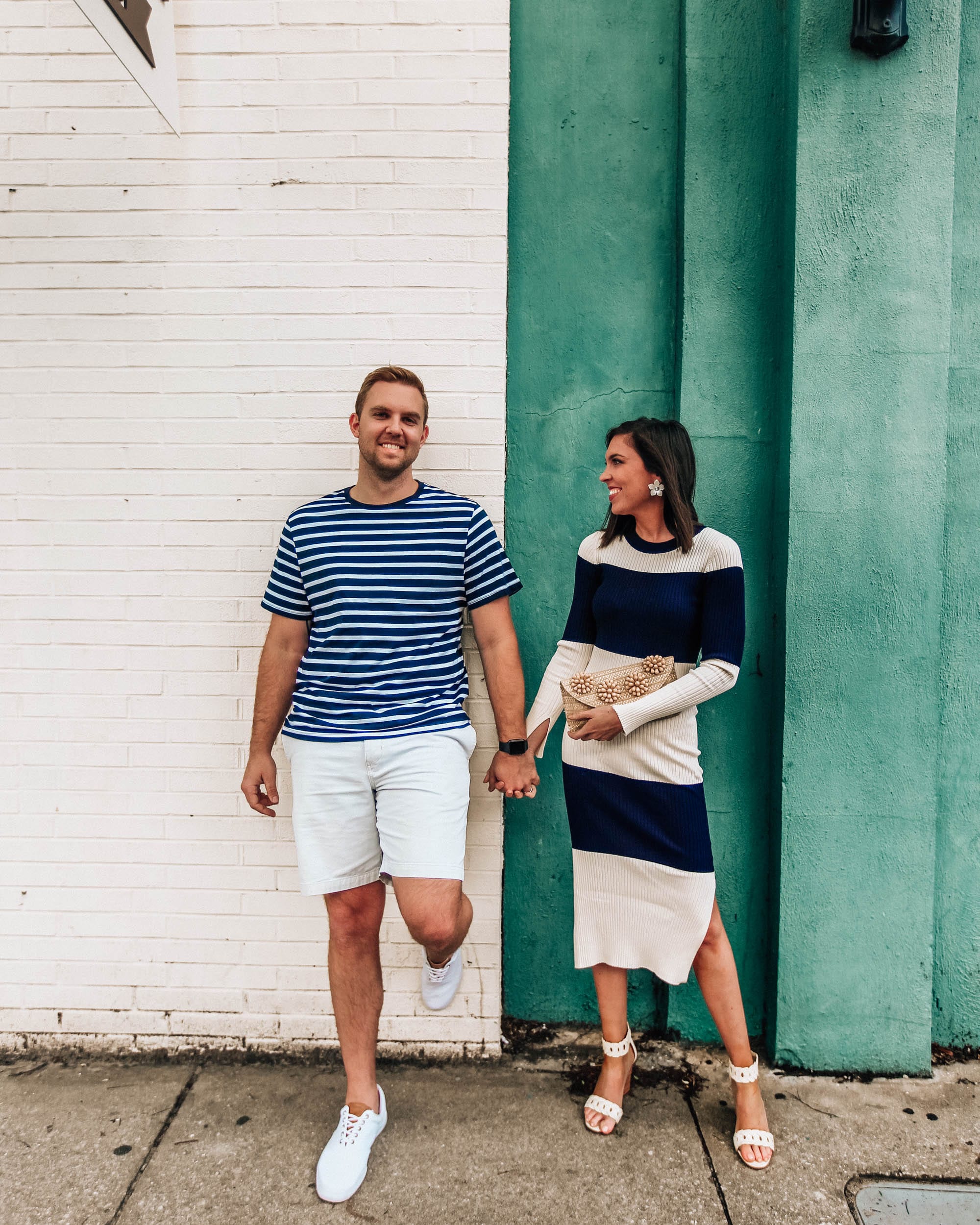 Filling Up an Empty Bedroom Wall
After having this empty wall for over a year beside my side of the bed, I decided to fill it with a few of these honeycomb shelves for a simple yet unique look. I just filled it with small items such as plants, a tiny tray for my rings, an oil diffuser, a photo frame, and other smaller items I love. They really complete the space perfectly!

Walks Through the Neighborhood
It’s that time of year where it’s still bearable to go on long walks before it gets too hot and I’ve taken full advantage of it. I love going on long walks with Colbie (Russell can’t go too far) and discovering new podcasts to listen to. I’ll have to round up my favorite ones I’ve found sometime soon but I’m really excited about ordering this for my walks!

Social Media Freedom
This month I felt a lot more freedom when it comes to social media. You might be like “what?”. As somebody who uses social media as a source of income, it can put a lot of pressure on you to post every single day, and lately, I’ve found that I don’t need to necessarily do that. I’ve mainly been taking either Friday or Saturday to not post on social media and it’s been really nice to have that time to catch up on other things and take time to recharge. 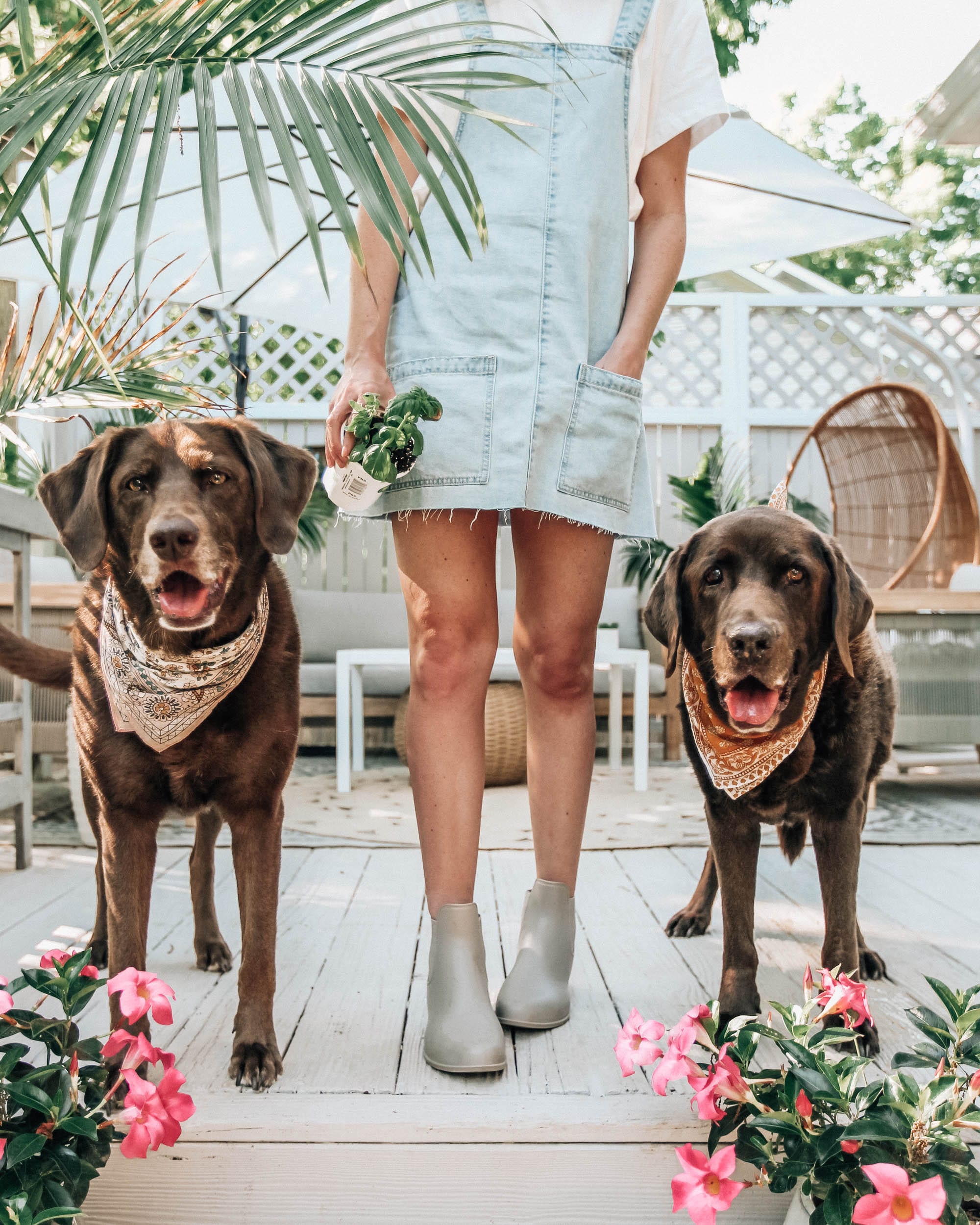 The shoes I haven’t stopped wearing.
If you buy any shoes for spring or summer, let it be these platform sandals! I’ve worn them probably 30 times since I’ve had them and they’re only $50. 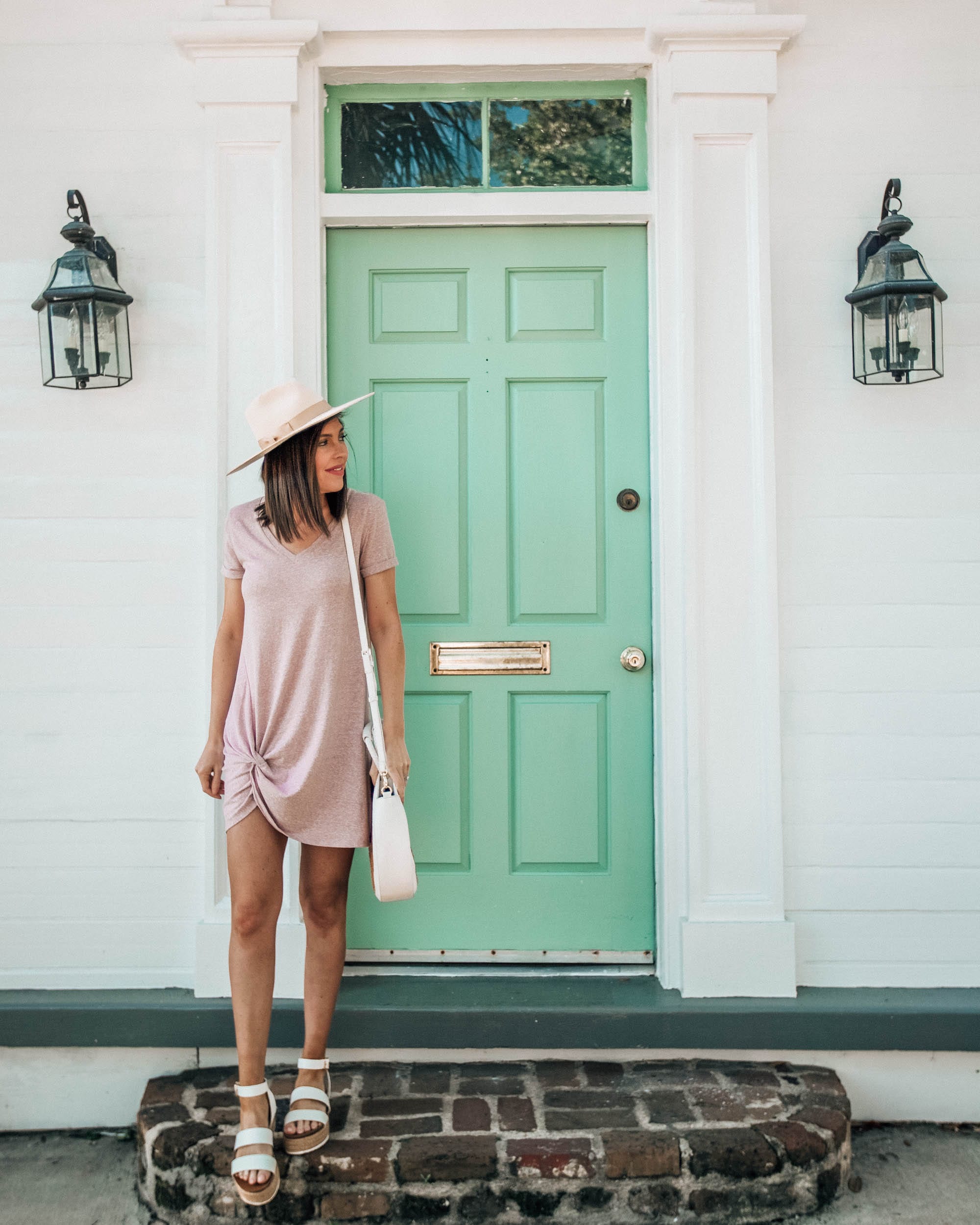 You can shop all of my outfits on this one page.

Paint Color Crush
At the beginning of April, we painted our dining room wall and I love the color we went with for a statement wall. We used a color called “Sage Slate” by Valspar (I think it’s an exclusive Ace Hardware color but I’m pretty sure anywhere would be able to match it). 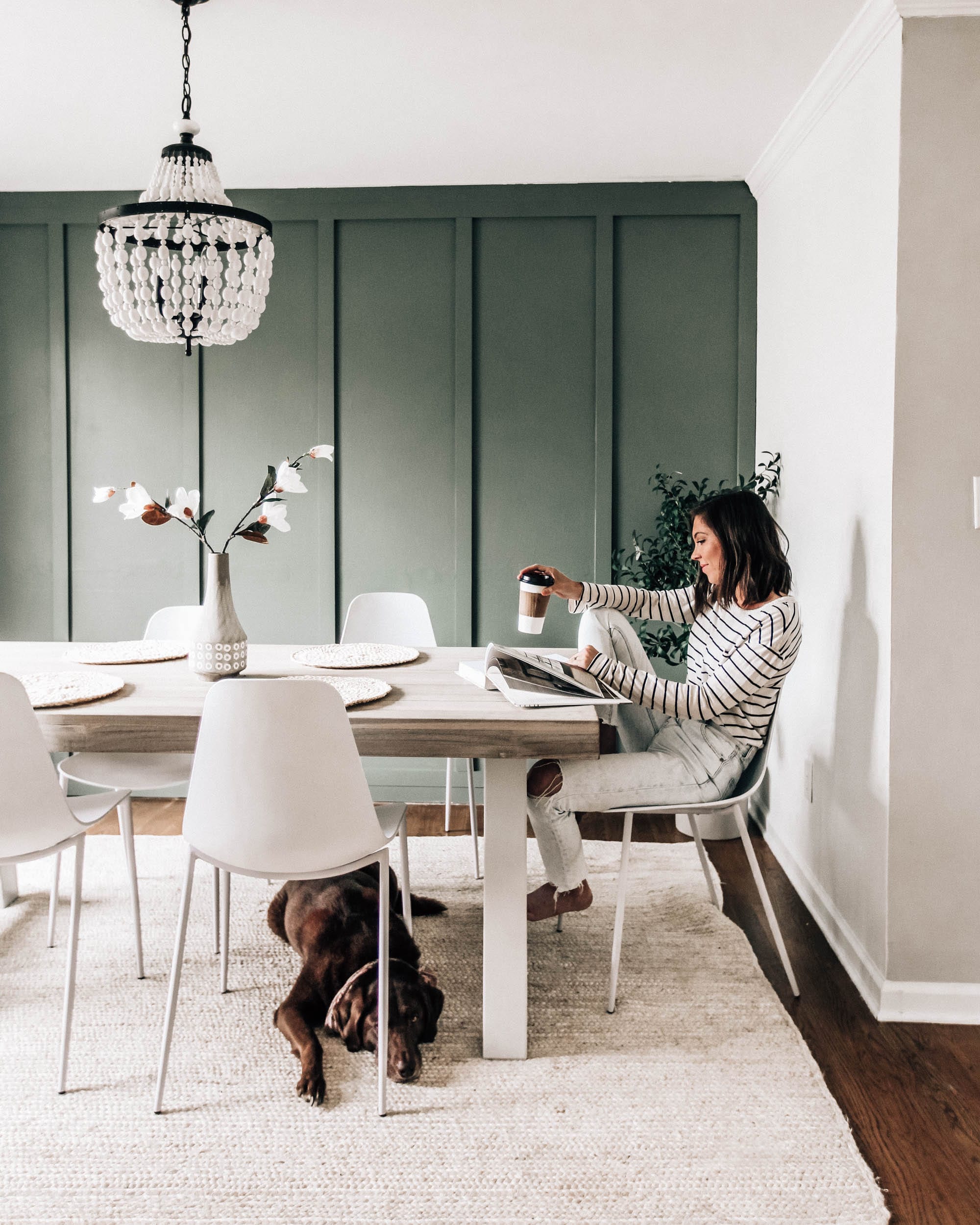 Trying out a New Online Workout Program
I love finding a workout class that works for you. For a while, I did Tone it Up (I’m still subscribed to their app but I think I’m going to pause it temporarily) and loved it. But every now and then you need to switch things up to add some excitement into your routine, so I tried out Burn Boot Camp a few times. I really loved it once I was there but it was the “getting there” part that was challenging for me. So, that brought me to try out a new online workout program called Barre 3. I know there are in-person Barre 3 classes but there aren’t any super close to me. Their online subscription is much more reasonable for my lifestyle right now and I have really loved it, even if I’ve only done 4 classes so far. I’m going to continue to do it at least for a month and then give you an update on my thoughts!